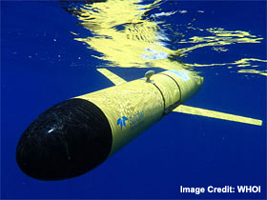 The Slocum Glider is a uniquely mobile network component capable of moving to specific locations and depths and occupying controlled spatial and temporal grids. Driven in a sawtooth vertical profile by variable buoyancy, the glider moves both horizontally and vertically.

The long-range and duration capabilities of Slocum gliders make them ideally suited for subsurface sampling at the regional scale. Carrying a wide variety of sensors, they can be programmed to patrol for weeks at a time, surfacing to transmit their data to shore while downloading new instructions at regular intervals, realizing a substantial cost savings compared to traditional surface ships.

The small relative cost and the ability to operate multiple vehicles with minimal personnel and infrastructure will enable small fleets of gliders to study and map the dynamic (temporal and spatial) features of subsurface coastal waters around the clock and around the calendar.